Near the end of the 2013 race season, I was starting to think about what I was going to do in 2014.  I have been racing 600cc for 4 seasons now and my Honda's eligibility for contingency money was up at the end of the season, so I was starting to seriously consider a move to a 1000cc bike.  I wasn't planning on winning any races in my first year, so I wouldn't be earning any contingency money to offset the huge cost of buying a new bike and converting it to a race bike--so that option was out.  My best/cheapest option would be to buy a used race bike.  So, I poked around a few bikes that some friends had for sale and found a couple that were super viable.  Then I got a call from the crew at Honda Suzuki of Salt Lake.

They wanted to show me something.  I came in and they walked me back to the warehouse and I saw this: 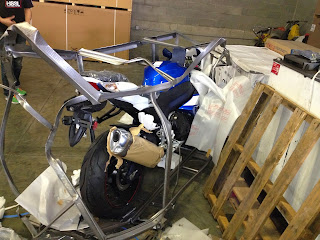 It was a brand new 2013 GSX-R1000 that had been damaged during shipping.  I said, "I want it."  Over the next couple months, they worked through lots of red tape with Suzuki, the shipping company, and the accountants to make this happen.  Ultimately, I got a sweet deal on what was considered a totaled bike.  Most of the damage is cosmetic; so for a race bike, it's perfect since I'll take all the street plastic and headlights off anyway.

I owe those guys a lot--they pulled off nothing short of a miracle to get this thing and by doing so, tremendously helped my move into the big bike classes for 2014!

More to come as the build progresses.

Tweets of the Jerry