Masters of the Mountains Round 3: Time to redeem myself. Sort of. 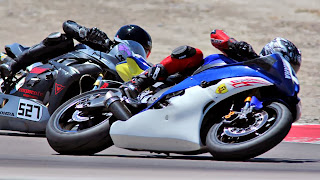 So, last time we left off, it was Saturday night before Round 3.  I had just spent Friday's trackday and Saturday's practice working through the still present problems I was having that caused my motorcycle to randomly shut off (despite lots of work and replacement parts during the weeks between rounds).  I felt confident the problem was isolated to the race fuel and it getting too hot and vaporizing, so I was going to have to race this round on pump (regular) fuel and have to skip the race fuel.

There's not much to talk about in the lead up to Sunday, because I literally spent every minute testing various combinations of fuel and components on my bike to isolate the issues.  We had fuel pumps changed, wiring harnesses in, wiring harnesses out, fuel modules in, fuel modules out, quick shifters... Anyway, you get the idea.  It was super stressful and caused me to miss out on really being engaged and able to enjoy riding with my best friend on his first legit trackday.  For that, I was most pissed.

Anyway, on to the races.  Royce McLean was making a guest appearance again with us this round to get ready for his upcoming AMA race at Miller, so I was psyched to race him.  At the last round, I thought he was taking crazy lines, but I definitely came to appreciate them as I started to understand what was going on and actually learned a lot about how to let off the brakes early and carry more corner speed.  It was literally a physical manifestation of a personal philosophy that I'm now trying to live up to in all aspects of life: Let off the brakes and tip it in.

Also, Scott Decker decided to put his retirement on hold for yet another round and was in attendance this weekend, as was my friend Chad Swain--all recovered from my flying knee slider that took him out at the previous round.  The best thing was that he had some Pirelli slicks (instead of the AMA Dunlop spec tires that he never got along with) on his bike and would be back to his old self and should be a threat in the races.

Sunday.  Race day.
We went through the normal gig this morning: a bit of practice, qualifying, prep the bike for racing, and wait.  For the King of the Mountain race, I was gridded second and knew I had to get a good start in order to have a chance at the win.  I did my pre-race rituals, and rolled the bike out for the warmup lap.  Although my crew and I were pretty confident we had the bike problems solved, there was still a little bit of a apprehension as I left the garage; we were all just hoping my bike would make it until the end of the race...

We were released for the warmup lap as a small group and circulated back to the start area.  Everything felt fine with the bike and any potential issues, I put out of my mind and focused on the task at hand, which was getting a good start.  The grid marshal lowered the red flag, walked off, and at that point, all eyes were on the starter.  Revs up, watching for the slightest movement from the starter.  As soon as the green flag was thrown, we were all off.  Scott Decker beat us to Turn one, with me in second and Royce behind.  Chad was swallowed up in the pack.  Our small group of three quickly began distancing the rest of the field.  I was right on Scott's rear wheel and Royce on mine.  We circulated like that for a few laps, when Royce passed me on the inside of Turn 2.  No problem, we were still with Scott and I was comfortable to lap at that pace, with plenty in the bag to make a move later in the race.

But, just as quickly as Royce passed me, he then passed Scott for the lead.  His intent to try to get away was immediately apparent, so I made a move on Scott in the next turn and got right back on Royce's wheel.  He and I put in a solid lap and put some space between us and Scott, who was starting to come back to Chad, now that he had gotten away from the group and was making up ground toward the front.  I was feeling good riding behind Royce and knew we were getting enough space that the race would come down to a straight up fight between the two of us on that last lap.  I had my moved planned for the final turn.  I just had to wait about 4 laps.  But, suddenly, at the entrance to Turn 5, I was on the ground and sliding.

I completely lost the front in an instant.  Race over.  I was fine, as was the bike, so I wheeled it out of the impact zone and was a spectator for the remainder of the race.  Royce went on to win, and Chad passed Scott for 2nd.  It was frustrating to fall down, but I had passed and gapped Scott, so I wasn't completely pissed.  Besides, I could pretty confidently point the issue to a mistake I made in setting my pressures to compensate for the extreme heat that day.  Lesson learned.

When the race was over, I was able to ride my bike back to the garage and Tarik got to work cleaning it off and getting a new rear tire in to get ready for the next race.  Thankfully, beyond a footpeg that was ground down, there was zero damage to the bike.

The next race was Middleweight Superstock.  We rolled out for the warmup lap and gridded up.  When the flag dropped, I got a decent start, but Royce got a better one and somehow passed me into Turn 1.  Again, with me in tow, we put a gap on the rest of the field.  I felt comfortable, but I'd lost a little confidence from the crash in the KOM race, and having gone three races now without a finish, I was riding pretty conservatively, just to make it to the finish line. I wasn't ever able to show him a wheel or make any kind of moves.  I pretty much just rode around behind him and collected a second place finish.  Which was OK.  I'll take it.

So, while not entirely redeeming, this weekend was slightly more fulfilling than the last round, but I didn't leave the track completely satisfied.

Huge thanks to Carrie, Tarik and the Honda Suzuki of Salt Lake crew, Jason Eldridge at Corporate Suspension, Scott Larsen at Fastline Race Tire, Andrea Onida at Dainese and AGV, Doug and Chesleigh, and everyone else that was out there helping out.

The next round is a WERA National, so stay tuned for that....

Tweets of the Jerry